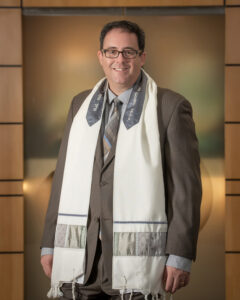 Rabbi Andrew L. Rosenkranz received his B.A. from Tulane University, graduated from Mercer Law School cum laude receiving Order of the Coif honors, and practiced law in the Tampa area for a number of years prior to making his life-changing decision to pursue the rabbinate. He was accepted into our movement’s seminary, Hebrew Union College-Jewish Institute of Religion, and, while a rabbinic student, served pulpits in Fairbanks, Alaska and Augusta, Georgia. Near the end of his rabbinic studies, Rabbi Rosenkranz taught 7th and 8th grade religious school students in New York City and served as rabbinical intern with the URJ’s Division of Jewish of Jewish Family Services.  He was ordained as Rabbi by Hebrew Union College-Jewish Institute of Religion in 2005.

For seven years following ordination, Rabbi Rosenkranz was the face and voice of the Anti-Defamation League in Florida, serving as its Regional Director. He was responsible for managing its outreach into the Jewish and non-Jewish community as well as overseeing its civil rights, interfaith, Jewish youth education, and fundraising efforts, which included a great deal of public speaking. During that period he continued to be involved in performing pulpit and life cycle responsibilities, including leading worship, teaching Torah, and performing weddings, funerals and b’nai mitzvah.

From 2012 to 2014, Rabbi Rosenkranz was on the staff of Congregation B’nai Israel of Boca Raton, a 1,000-plus household congregation, as Rabbi and Director of Development. He was involved in lifecycle events, preaching, adult education, family programming, early childhood and religious school Judaics, and spiritual care of members, in addition to his development responsibilities of fundraising programming and all that it entailed.

He is a member of the Central Conference of American Rabbis, Palm Beach Board of Rabbis, Jewish Community Relations Council, and the Reform Synagogue Development Professionals group.